Sunday, March 18th at 3 PM – Our special guest recitalist is Glenn Rodgers, who recently retired from full-time church employment after serving for the past 35 years as Organist and Music Director at the First United Methodist Church of Moorestown. He is a frequent recitalist at the Atlantic City Boardwalk Hall known for its Midmer-Losh organ, reputed to be the largest organ in the world. In addition to music degrees from Westminster Choir College and Temple University, he has earned the coveted Associate of the American Guild of Organists diploma. Nearing the end of a six-year term as the Mid-Atlantic States Regional Councilor for the A.G.O., he is heavily involved, along with Marilyn Rabbai and other leaders of our local chapters, in planning the Regional Convention to be held here in South Jersey in July of 2019. Glenn has designed a program for us with lots of variety and excitement, everything from Verdi’s Grand March from Aida to the Beatles’ Birthday song! We will all have a chance to sing our church’s anniversary hymn penned by Virginia Fleming before Glenn does an improvisation on the tune: “Mit Freuden Zart.” We hope you’ll join us and invite family and friends. There WILL be a birthday cake reception immediately following. This event is free of charge and open to all! 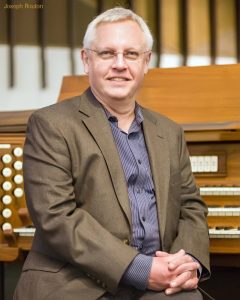